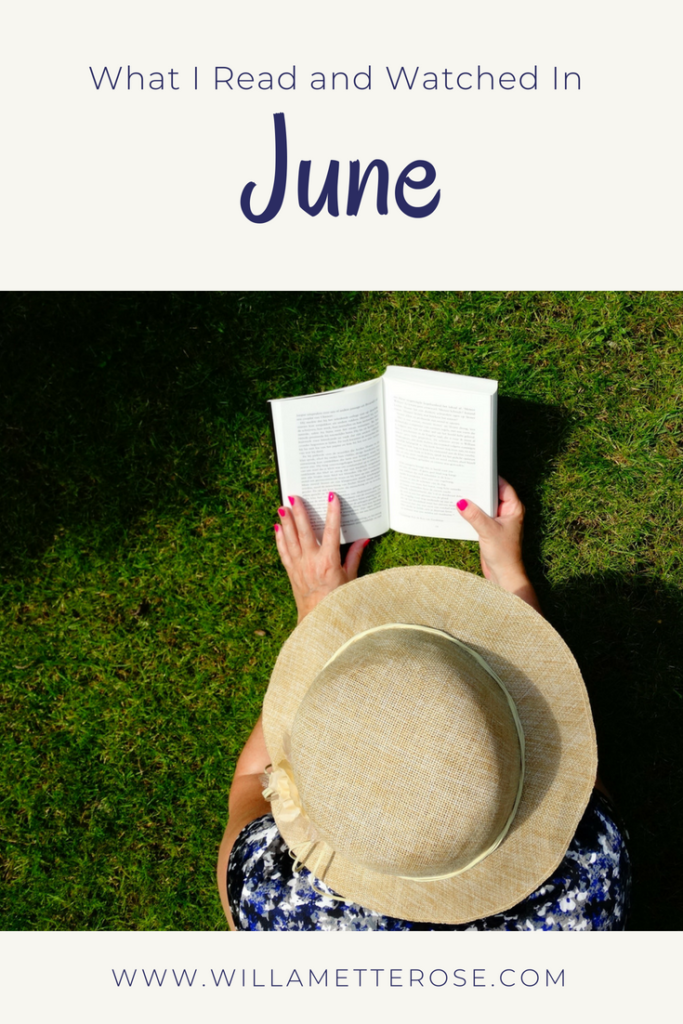 Yes!  The fourteen year wait for the second installment of The Incredibles was worth it!  Another masterpiece of animated, family-friendly cinema. The pacing was spot on, the script hilarious, the characters relatable.  The family interactions were utterly charming. Totally recommend!

I love all things Scottish and Irish and somehow had never seen  Brave?  I don’t know how I missed out for so many years, but I rectified the problem last month!  I loved the setting (it looked just like the parts of Scotland I explored last summer), the traditional music and found the story charming.  Still, I did not think the plot and characters lived up to usual Pixar standards, and found some of the humor inappropriate for children. Did you know Scottish singer Julie Fowlis is featured on the Brave soundtrack?  She has a gorgeous voice and sings mostly in Gaelic.  One of my top Scottish artists to listen to.

BBC did a masterful job of adapting one of Dickens’ longest novels to the miniseries format.  This is one of their all-time best miniseries, in my opinion. The acting, script, pacing, cinematography, costumes and respect for the source material are all top notch.  I have listened to this audiobook version of Little Dorrit a couple times and watched the miniseries many times. As it is currently free on Amazon Prime, I took time to delve into the world of Amy Dorrit once again.

Little Dorrit is the story of a child born in the Marshalsea prison for debtors, and about how her fate is connected with many others in London.  There is a love triangle between Amy and John and Arthur and the excitement about whether her father will get an inheritance, but this novel is not about the plot, but about the characters.  So many widely varied characters from all classes, but their lives and fates are strangely intertwined and all lead back to little Amy Dorrit.

Now a famous and successful artist, Roman Valasco lives a double life as a graffiti artist, wrestling with his past and his place in the world.   Grace Moore is a single mom, struggling to regain her feet and her faith after a disastrous marriage and a string of mistakes. When Grace accepts a position as Roman’s personal assistant, it seems as though she is safe from falling in love with a man who couldn’t be more different than what she wants.  As the two get to know each other, they discover they have much more in common than they could possibly have imagined. Could they be to each other what they both need?

Usually I stay away from the Christian romance genre.  I usually find the characters shallow, the plot, setting and interactions unnatural, the text preachy among other problems.   This novel, however, gripped me. It tugged at my heart and fueled my compassion. It felt real, raw and probing, and yet infused with light and hope.  The characters were all so real, the situations and conversations natural, the hard decisions tore at my emotions. It opened my eyes to the world of gangs, prostitution and CPS in a gentle way that someone like me who was never exposed to that world can understand.  My main complaint is that even with so many things going for it, this novel still couldn’t get a conversion right. It was the one part that felt forced and unnatural, not to mention theologically questionable. But since a conversion is a real, living work of the Holy Spirit, I can appreciate that no author can do a made-up one justice.  Despite that chapter, I was still able to get completely wrapped up in the characters and the plot. Recommended for older readers only, due to the adult nature of several themes.

Booker T. Washington’s autobiography tells of his earliest memories as a child on a southern plantation and recollection of what life was like for his mother and her fellow slaves.  He tells of the end of the Civil War and freedom and the poverty his family found themselves in as they tried to eek out a living in the post-war south. Booker longed above anything to get an education.  He had unusual tenacity and diligence and was able to attend a vocational college for colored people. He did so well there and found he loved teaching and was recommended to start the Tuskegee Institute while still in his 20s.   Many times the book bogs down in reports of Washington’s speeches and all the people he met. It’s not exciting by any means. Yet, I found the first hand account of a slave trying to raise himself in the post-Civil War south and his perspective on the race problem in America and the challenges his people faced to be incredibly fascinating.  This should be a must-read for every American.

This young adult romance novel is set in Medieval Germany and gives a slight nod to the tale of Sleeping Beauty.  Rose is the daughter of a poor woodcutter, but Frau Gerosha, the local healer, takes the girl under her wing and brings her to live at the castle to learn the art of healing the sick.  There, Rose meets and falls in love with the young Lord Hamlin. He cannot love her in return, as he has been betrothed since childhood to a mysterious princess in hiding. Instead, Hamlin’s roguish brother declares his love for Rose.  Rose is forced to grow up fast, learn to know her heart, walk into her destiny and find the courage to make the right decisions even when her emotions are begging her to do otherwise. The author often achieved a feeling of time and place, but sometimes jolted into modern sentiments.  The plot was exciting and would give young adults an excellent opportunity to discuss purity and doing the right thing in matters of the heart.

The problem of pain

For years I’ve been meaning to read C.S. Lewis’s famous treatise on why God allows pain in the world.  With typical Lewis skill, the book weaves words and logic in a way that makes me think, ponder and marvel.  I love his writing. I’ve never read any author who could choose words so perfectly. You may not agree with all of Lewis’s theology (I don’t) yet The Problem of Pain shows me a better way to view the world, the suffering in it, answers some hard questions and teaches me to appreciate the unfathomable love of God in a new way.

This post contains does not currently contain affiliate links.

In the month of April, as northwest Oregon … END_OF_DOCUMENT_TOKEN_TO_BE_REPLACED